The Cosmic Aeroplane was the brain child of Steve Jones and Sherm Clow — first opening its doors in June 1967. It was a small place on the corner of Ninth East and Ninth South that sold underground newspapers, bells, beads, paraphernalia, and other assorted ‘hippie’ merchandise.

(Or follow the links in the Menu Bar near the top of this page.) 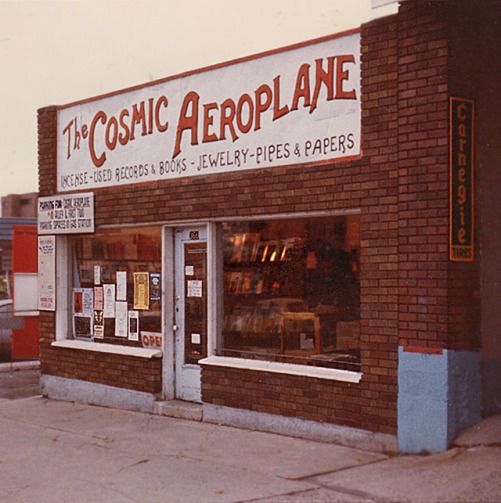 Other General Links:
A History of the Cosmic Aeroplane by Joe Stohel from the EVENT Newsmagazine 1992.
Salt Lake Sixties — Catalog of the Poster Show at the Art Barn on Finch Lane 1995.
Feelin’ Groovy — The 60’s Counterculture in Utah from Salt Lake Magazine 2001. 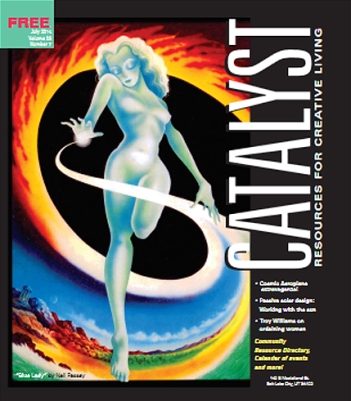 J.R Taylor and CATALYST Magazine won an award from the Society of
Professional Journalists in 2015 for Cosmic Aeroplane, A Love Story
J.R. Taylor’s photo and description of the SPJ award. (PDF)

This site thanks CATALYST Magazine for publishing Steve Jones — In Memoriam in their January 2017 printed-on-paper edition — Volume 36, number 1 (with credit to Michael Evans, and the family of Steve Jones.) 2017 was also Catalyst’s thirty-fifth anniversary.

Link to the Online Version (minor and positive revisions by Catalyst‘s staff):
IN MEMORIAM: HOMAGE TO COSMIC CREATOR STEPHEN JONES

Cosmic Co-Founder Sherm Clow noted the passing
of Steve Jones in Rev Willis’ Holy Ground Blog:
Only A Hobo, but One More is Gone

Connie Lewis of UTAH STORIES Magazine printed
an article about Steve Jones in the June issue of 2015:
A Look Back at Cosmic Aeroplane

The SALT LAKE TRIBUNE published a multi-media
online feature on January 27, 2017 called:
Whatever Happened To … The Cosmic Aeroplane?

Glen Warchol mentions and quotes Bruce Roberts in his Salt Lake Magazine blog, but some information about Roberts, final Managing Partner of the Cosmic Aeroplane, wasn’t emphasized in the Tribune’s later article. For more context and information see:
Joe Stohel’s Cosmic History from The Event 1992 (PDF)

The SALT LAKE TRIBUNE published Whatever Happened To … The Cosmic Aeroplane? by Chris Smart, with fewer photos, in its printed edition on Sunday, January 29, 2017. (The following reproduction was scanned  and posted with permission.)
Salt Lake Tribune_January_29_2017 (scalable PDF)

Additional History and Context —
Clock Mother & Company (with Wendy Leoff, Meridoc, Duffy, and P.T. Holly.) was the Modern Dance group that worked out of the rear space at 369 West South Temple.
The Human Ensemble produced independent plays in the rear space at South Temple, and some of their performers would also join Ed Grisco’s Salt Lake Acting Company.
FM Radio station KRCL began broadcasting at 262 East 1st South Room 222 during 1979, above the thriving Blue Mouse Theater, three years after neighboring Cosmic Aeroplane Books & Records was firmly and finally established at 258 East 1st South in 1976.
Community Radio KRCL 90.9 FM continues to broadcast throughout the Wasatch Front and Northern Utah in 2018.
Cosmic Aeroplane’s Record Department DEFINITELY sold Disco during the days when the store was grossing a million dollars a year at the 1st South location, but Cosmic customers bought OTHER quality fare as well, and continued to do so for another decade.

Associated Press covered the public collection of local Alternative posters and printed memorabilia from the Cosmic Aeroplane and other hip and fashionable enterprises from the 1960’s to the recent past, including calendars and especially music concerts, located in the Rare Books division of the Marriott Library at the University of Utah.

The Marriott Library made a blog post about their Poster Collection.

This page is an independent link to archival material about the Cosmic Aeroplane. The Meuu Bar across the top leads to general pages.

On conventional computer screens “Further Chapters in Cosmic History” are in the right column — listed as “Recent Posts” and followed by a “Blogroll” consisting of the related links shown below.

“I thought there should be a place where you could get underground papers, cigarette papers, jewelry, that kind of thing,” said Steve Jones. “Posters were a big thing at the beginning, dance posters, W. C. Fields posters. It was a head shop, but a head shop in the terms of using your head — I wanted some kind of image of traveling in your head, hence the Aeroplane part. That didn’t necessarily entail drugs, either …”

The Cosmic Aeroplane on First South

We actively request your contributions of pictures, memorabilia, and oral histories concerning the Cosmic Aeroplane — please contact our blogmeister:

Blogmeister Michael Evans is an author and historian. 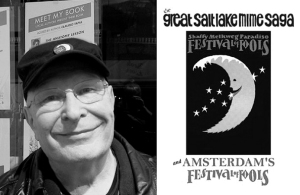