About the Cosmic Staffers Project: We are actively soliciting photos, fliers, and associated media concerning former staffers at the Cosmic Aeroplane. A host of talented writers, artists, performers, and entrepreneurs came and went through the back doors as the public thronged the front.

Lisa Versteeg worked at the counters of the Cosmic Aeroplane, Blue Boutique, and her own shop Gaia. 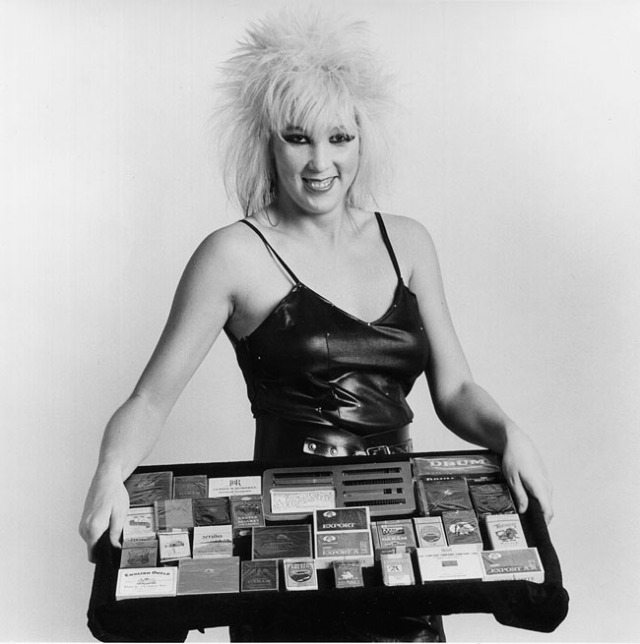 Lisa Versteeg became the stylish face of the Cosmic Aeroplane’s “Tobacco Boutique,” downstairs in the West Wing of the location at 258 1st South — Circa 1984, photographer unknown.

Images of Skyline High School’s Horizon newspaper, plus a close-up of Stewart Nelson, and Lisa V. at Red Rocks to see a concert by The Clash.

Read an online PDF of the article : HERE

Advertisement scannned courtesy of Lisa V. — who stated she “still has these buttons.”

Deja Vu! Lisa repeatedly altered the color of her hair, but here’s the original platinum picture where she was pushing fashion accessories like  pin-backed buttons from the musical scenes of the 60’s, 70’s, and 80’s:

Versteeg played bass for a Rock band named Shot In The Dark:

Lisa Versteeg playing Bass in the hard-rocking group “Shot In The Dark” — Drawing by M. Evans (1984)

Shot In The Dark shared stages with acts like Psychedelic Furs and Siouxie & The Banshees as they gigged around the Intermountain West:

This video was shot in performance at The Barb Wire:

Collage by Lisa Versteeg (She was brunette that week.) — Lisa made 99% of Shot In The Dark‘s flier/posters.

Lisa’s paste-ups and collages were reproduced and distributed via commercial print shop methods throughout Shot In The Dark’s range of venues. They could be on screamingly bright paper, tastefully colored paper, or simple black and white on plain paper: 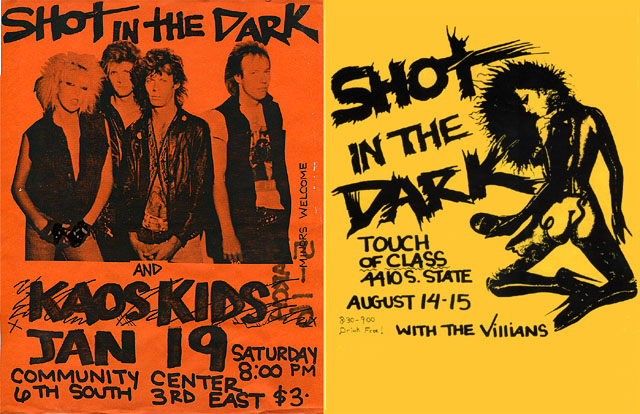 Logos and graphic design by Lisa Versteeg — scanned by permission.

Another pair of examples — besides using actual pictures of herself, Lisa would let the audience’s imagination work as to who was who (and by whom) on the posters. 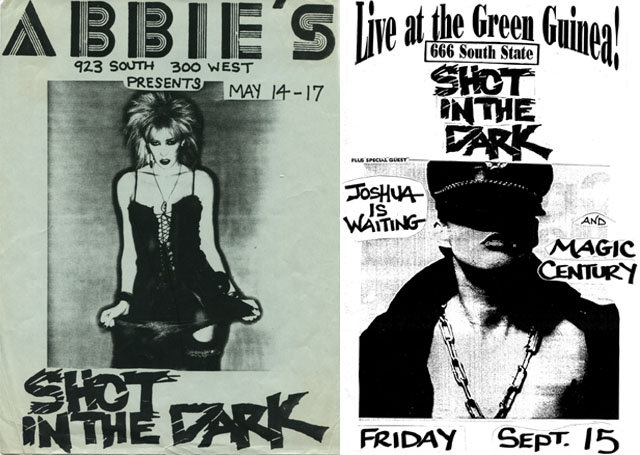 Logos and graphic design by Lisa Versteeg — scanned by permission.

Brad Collins, later of Raunch Records, and a major connection between the Cosmic Aeroplane and KRCL, promoted Punk and Rock concerts at the Salt Lake Indian Center on 13th South in between his many other jobs.

Brad Collins when he was a fellow-inmate in one of the ever-shifting basement sections at 258 East First South, like used books, records, and institutionally renamed “Head Shop” underneath the ground-level floors of the Cosmic Aeroplane  — photo courtesy of subterranean co-worker Lisa Versteeg.

Shot In The Dark played at the Salt Lake Indian Center many times: 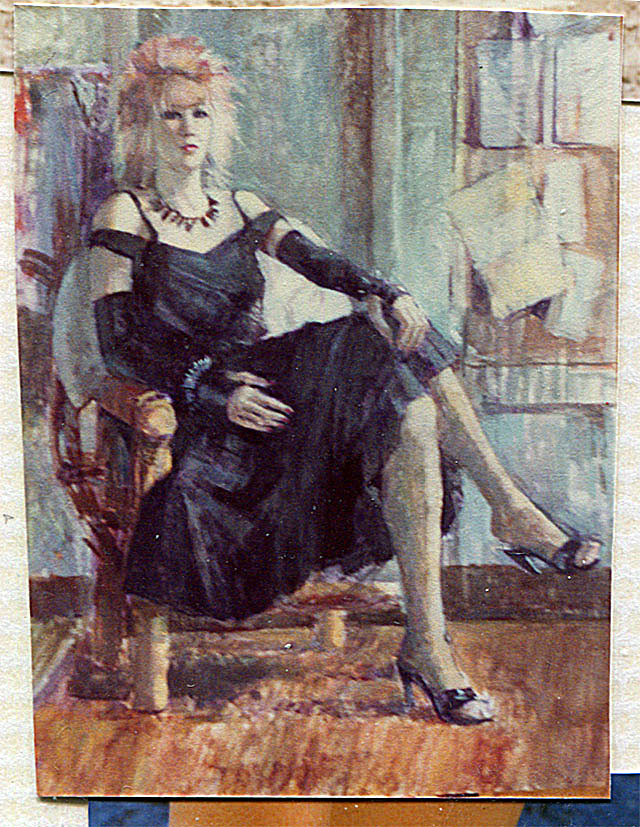 Lisa posing for a painting — from a photo by the model.

As a model, Lisa created very compelling photographs, as she proved in many an advertising campaign:

Roots of the later Blue Boutique — led by former staff members of the “Head Shop” A.K.A. “Boutique” at 258 East First South in 1987. The Cosmic Areoplane occupied 369 West South Temple from 1969 to 1973, long before it was Sun Tavern’s ‘East Room.’ Poster signed by “Archioni,” courtesy of Ken Sanders Rare Books.

When Tony Martinez started his own business, as many ex-Cosmic staffers did, Lisa chose to go with her “Boutique” boss, worked many hours up front, as she did before, and became de facto spokesmodel for this very successful franchise during its first decade:

Lisa was later co-owner and manager, in partnership with her sister, of the alternative clothing and art shop Gaia, located on Third South between Third and Fourth East:

4 Responses to The Cosmic Staffers Project V.1 — Lisa V; Mistress of the Boutique