While gathering the myriad items associated with the Cosmic Aeroplane, Blogmaster Michael heard from Ken Sanders that the shop commissioned original artwork for advertisements to be placed in the commercial telephone directory.

Cosmic Yellow Pages Advertisements from 1977 and 1976 — Art and lettering by Neil Passey.

Further research found these old fragile phone books, printed on the most acidic pulp paper, stored in the Rare Books Division of the Marriott Library. They outlined a rough history of the shop. These advertisements were sometimes reprinted as bookmarks or business cards, but every one was seen by hundreds or thousands of customers.

The following images and PDFs were photographed with the physical assistance of the Rare Books Department staff, especially Lezann Keshmiri — with infinite thanks from Blogmeister Michael. NOTE: Patience is a virtue when loading large PDF files.

1967 to 1968 — For the first two years of the Cosmic Aeroplane’s existence, there were no listings in the paid advertisement section of the “Bell System’s” phone books. However, Polk’s Directory listed them as a “Psychedelic Shop” in late 1967.

First location of the Cosmic Aeroplane — From a scan by Steve Jones.

PDF of this complete page from Polk’s Directory of 1967

NOTE: The store moved from 871 9th South to its second location, two doors east, at 875 9th South during these early days.

1969 to 1973 — The Yellow Pages listed the third Cosmic location on South Temple under Gift Shops:

The Cosmic Aeroplane relocated to a space near the still-extant Union Pacific Depot in 1969.

The PDF files below show entire pages from phone books of the following years:

The corner of 9th South and 9th East continues as an Alternative center in the 21st century.

Former Cosmic partner Jack Bills opened a shop of his own, called The Connection, near the corner of 9th and 9th, and bought an advertisement in 1973. (Above)

1974 and 1975 — The fourth incarnation of the Cosmic Aeroplane was in the Yellow Pages under Gift Shops, but was also on the Book Stores list by 1975:

NOTE: Central Book Exchange was still in business as of 2014.

The PDF files below show entire pages from the phone books of the following years.

Cosmic Aeroplane officially added the word “Books” to its name, in one form or another, while moving to the fifth (and last) location:

This PDF file shows the entire page from 1976. 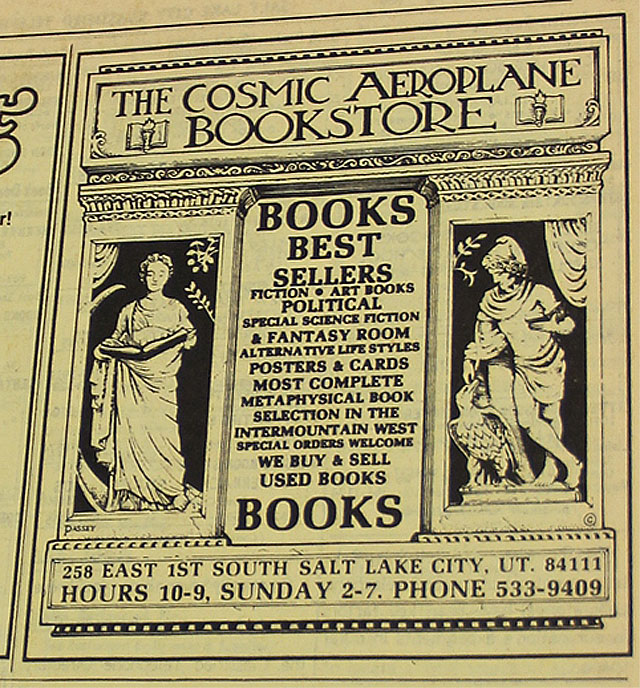 This PDF file shows the entire page from 1977.

For the next seven years, Cosmic Aeroplane purchased advertisements on two nearby pages in the phone directory: 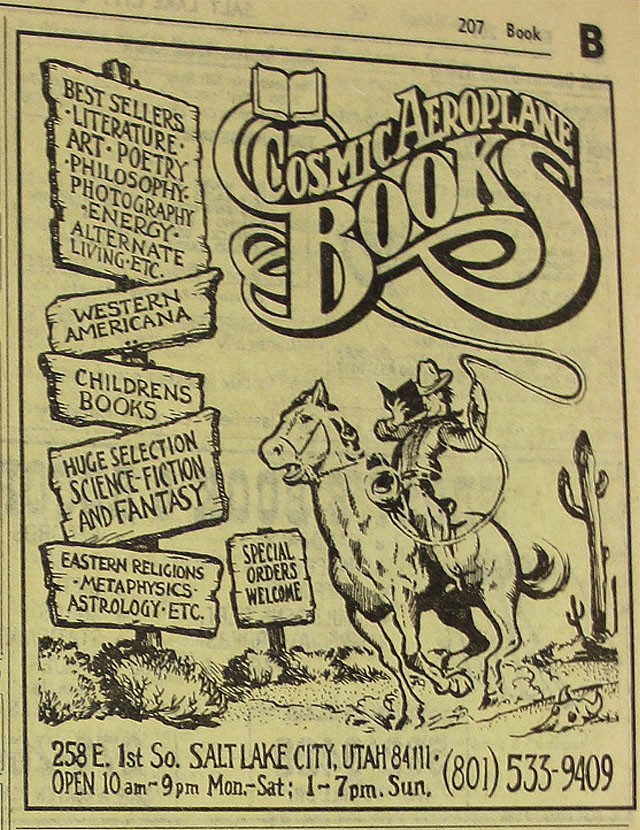 The single-column advertisement on the following page was new as well:

The single column advertisement was different yet again:

NOTE: These same ads were repeated in the 1981 Yellow Pages. 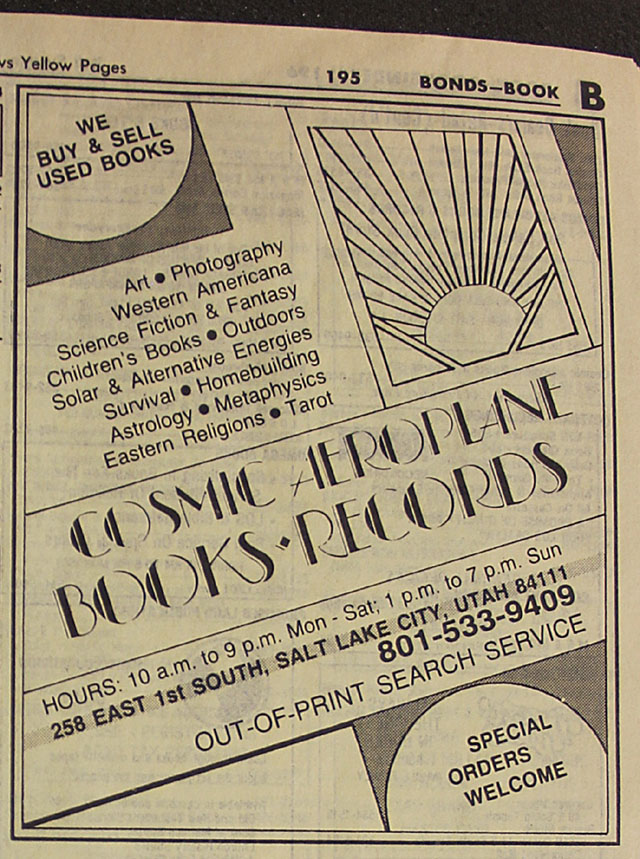 Text ads replaced graphics on the additional page during these three years:

Single advertisements were the rule from 1985 onward: 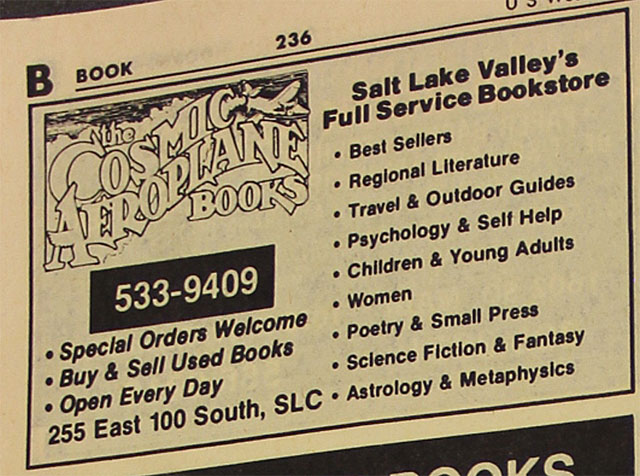 The Cosmic Aroplane ran this same graphic in their final Yellow Pages advertisement:

CODA — The West Bay of the final Cosmic Aeroplane building housed a shop called Stargazer, which employed several Cosmic staff members until the end of 1991:

The East Bay became the home of Comics Utah for most of another decade, inheriting the old address, and a portion of the old customers:

Two column ad for Comics Utah, which was totally unaffiliated with the Cosmic Aeroplane.

We actively request your contributions of pictures, memorabilia, and oral histories concerning the Cosmic Aeroplane — please contact our blogmeister: mike_evans_exile@yahoo.com