The Cosmic Aeroplane sold records for most of its existence.

Curious buyers sought out both new and used records of various genres. Smokey Koelsch started managing this department at the West Temple location and continued in this role when the shop moved to First South. The Record Department was located in the basement of the East Bay during the late Seventies, but moved upstairs to the West Bay during the Eighties, after Smokey started a store bearing his own name on Fifteenth East.

The hand-written charts below document sales of new albums during late 1980 and early 1981, but Cosmic customers were also buying used records throughout the history of the store. We have included images of the covers to help visualize this major commercial art form at the end of an era when music actually made more money than the movie industry, in terms of consumer sales.

Pop Music, New Wave, Ambient, and Jazz are represented, along with the Roches, three women who made music that transcended genres and categories. 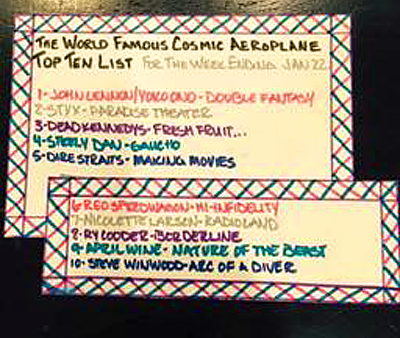 Plenty of Pop on the chart this week, but Punk pioneers Dead Kennedys impressed the Cosmic customers too.

Joe Sample created a nexus of Jazz, Soul, Blues, and Funk; Nicolette Larson performed as a Pop Singer, but she never achieved the fame of other Pop groups who dominated this chart despite some major hit singles. 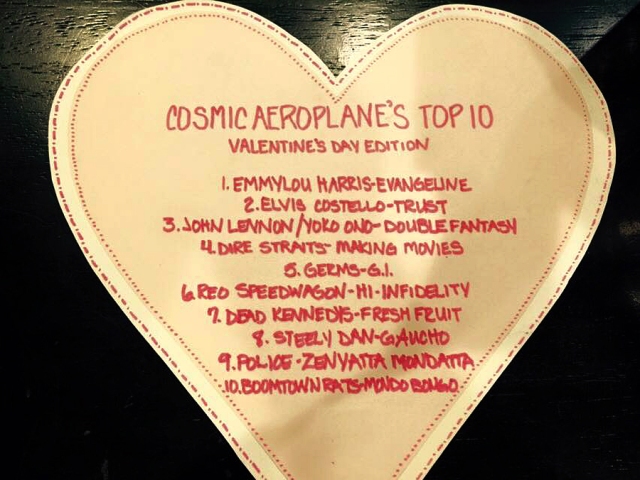 Highly-respected singer Emmylou Harris had fans in several genres; Elvis Costello was a major Post Punk star; The Germs give fellow Punk Rockers the Dead Kennedys some company on this chart; Bob Geldoff of Ireland’s Boomtown Rats starred in the movie version of The Wall and would later lead “Live Aid.” 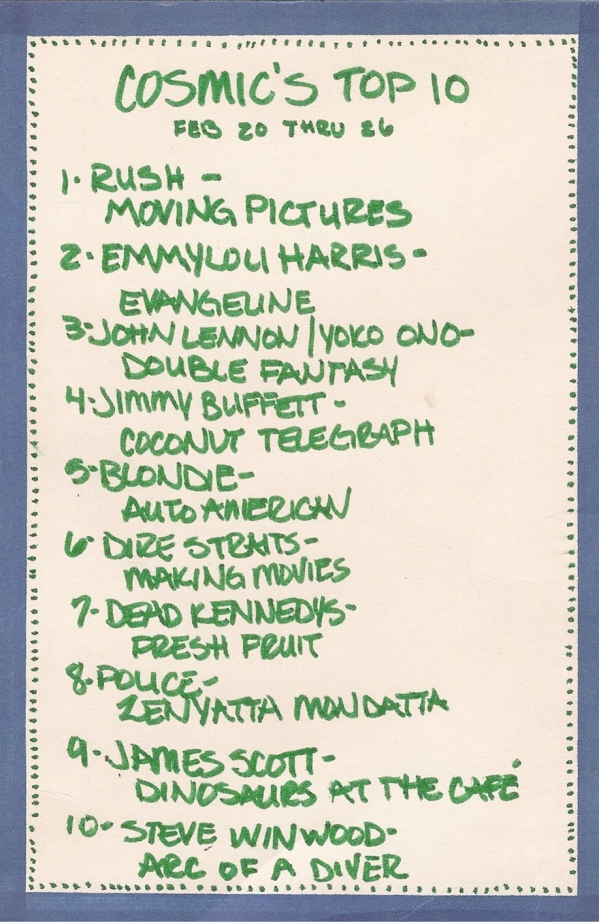 Then-local entertainer James Scott re-entered the chart; Jimmy Buffett’s vast fan base kept expanding; Rush had played at the old Salt Palace arena in March, 1979. They would also perform there in June, 1981 and September, 1982. “Moving Pictures” was their eighth studio album.

Rush’s Moving Pictures was released on February 12, 1981 by Mercury Records. The late Jazz master Grover Washington Jr. enjoyed continuing success with Just the Two of Us, co-written by Bill Withers.

My Life In the Bush of Ghosts by Brian Eno and David Byrne was officially released in February 1981 by Sire/Warner Brothers Records; Punk Rock grabbed a spot on this chart thanks to the Circle Jerks; Robin Trower’s Progressive collaboration with bassist Jack Bruce and drummer Bill Lordan got some attention from Cosmic customers who might have remembered Procol Harum, Cream, and Sly & The Family Stone;

A Big Leap Into Summer

Barb Guy recently found some more Cosmic Aeroplane Top Ten Charts from 1981, and photographed them for the Cosmic Archival Site.* One of them was drawn several months after most of the others, which meant a few pictorial adjustments here. (Scroll up to see Exposed and Kraftwerk with J. Buffett.) These album covers are half the fun — ENJOY!
*December 2016

Facing the music: Tom Petty’s career would see some downs in the Eighties, but then it recovered nicely; Santana had a few hit singles in the MTV Era; Phil Collins stepped out from behind the drum kit in Genesis, and made himself and the band wealthy indeed; Prolific songwriter Kim Carnes had a huge hit with “Bettie Davis Eyes,” written by Jackie DeShannon and Donna Weiss, but she wrote most of the remaining songs on “Mistaken Identity,” her biggest album. 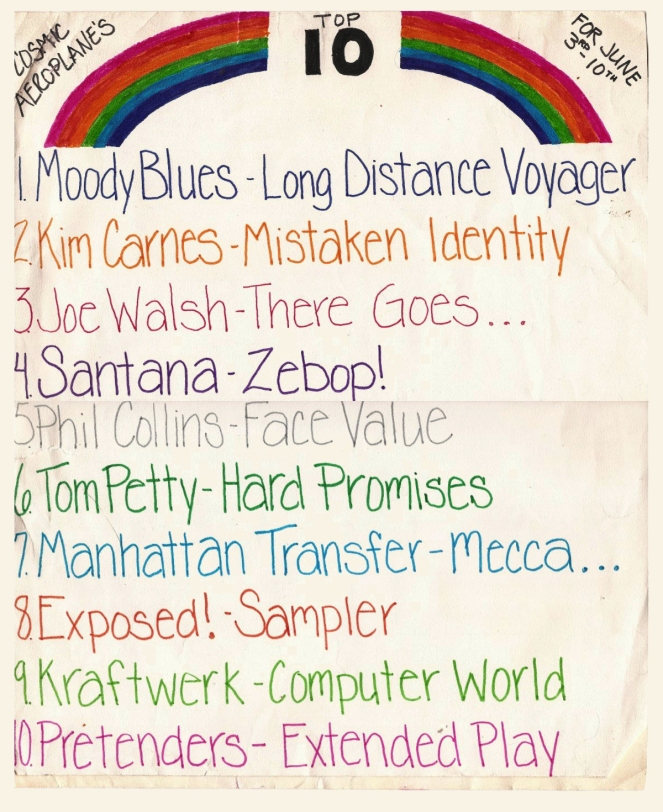 Phil Collins’ first album was the start of something BIG! Because he had to sing, he later toured with master drummer Chester Thompson, whom Salt Lake knew from the Fowler Brothers/Air Pocket band; “Exposed!” was a two-volume discount collection by hit-makers Loverboy, Judas Priest, Roseanne Cash, The Romantics, Adam and the Ants, Garland Jeffreys, The Boomtown Rats — also Ellen Foley, Ian Gomm, Steve Forbert, and The Sorrows; Kraftwerk (Fathers of the New Wave) kept mixing humor into Synth-Rock.

Chrissie Hynde and her Pretenders are as loved as ever in the 21st Century; The jazzy Manhattan Transfer made mainstream hit records for a decade; Ringo’s brother-in-law Joe Walsh still plays whenever he pleases, with a remarkable variety of groups; The Moody Blues made some outstanding hit records in the Eighties, and re-established themselves as a First Class Concert Band — a well deserved reputation that they carried through the 1990’s and still carry into the present.

Coda: Pop Stars and Popular Albums on the Cosmic Charts

(L to R) Country crossover artist Juice Newton achieved the height of her career with three smash singles from Juice — released in February 1981; John Lennon’s best songs from Double Fantasy were played on radio stations for well over a year after its release; Steely Dan’s Gaucho contained a pensive hit single called Hey Nineteen, but the once-productive band disappeared from the music scene for twenty years following the release of this album; James Taylor charted one more radio hit after a decade in the spotlight, doing a high-cost hootenanny in a Hollywood studio with fellow singer/songwriter J.D. Souther.

Dinosaurs at the Cafe, by James Scott showed up on several Cosmic charts during this era.

Barb Guy says: “James Scott was a local guy that you could see playing around town.”
She also contributed the link below —

Barb also writes: “The record shop was in the basement the whole time I worked there, which was through probably late summer of ’81. Smokey left before I did and when I left the Cosmic, I went to work for Smokey, eventually becoming the manager of the shop.
I worked at Smokey’s until – and a little bit during – my time on the air at KCGL, so maybe 3 years.”
———————————————————————————

All photos of the Cosmic Aeroplane best-seller lists are courtesy of Barb Guy and were originally posted on the Cosmic Aeroplane and Blue Mouse Facebook page. The images from contemporary record jackets are used for scholastic purposes only, in the context of this article — purposes which are protected by international law.

We actively request your contributions of pictures, memorabilia, and oral histories about the Cosmic Aeroplane and related enterprises — please contact our blogmeister:
Email: mike_evans_exile@yahoo.com