1979 window display honoring the 40th Anniversary of the Wizard of Oz movie, with merchandise, memorabilia, and books by L. Frank Baum, creator of the “Land of Oz.”

Between 1976 – 1981, Cosmic Aeroplane held a series of events that set the independent, alternative bookstore on a new course.

Whether it was a book signing, lecture, art/photo exhibit or film festival, Cosmic events were employee-inspired and invited the entire Salt Lake City community to experience new literature, philosophy/religion, art, photography and film on a more personal level with the authors and artists.

During those years, I was the trade adult and children’s book buyer, as part of the store’s new, used and rare book buying team that was led by Cosmic co-owner Ken Sanders and included Jose´Knighton, Richard Montague, Bob Ormsby and Jim Taylor. Since we each had our own unique specific interests and specialties, the depth and breadth of events we created were far-reaching.

With the creative advertising artwork and design skills of Jose´and Callie Floor (card, poster and jewelry buyer) and the publicity contacts of co-owner Bruce Roberts, we created a loyal community of followers seeking direct contact with the published writers and artists they admired or were just discovering.

Often, we would contribute a portion of the proceeds from these events to local and national nonprofits, such as the Utah New Thought Alliance and the Sierra Club. As a byproduct of the success of these events, we also created a reputation for the Cosmic Aeroplane in the book industry as an independent bookstore that did these types of events right.

In 1980, we were asked to contribute a chapter in the 3rd edition of “A Manual on Bookselling” by the American Booksellers Association on creative promotional events. Reading that chapter to refresh my memory on those events reminded me of the real impact that Cosmic Aeroplane had on the Salt Lake City community’s cultural experience –- there was nothing else like it.

One of the first events Cosmic sponsored … was one that Jim (Taylor) wanted to do with Doug Boyd, the author of the “Rolling Thunder: A Personal Exploration into the Secret Healing Powers of an American Indian Medicine Man.”

Boyd was giving workshops through the Cross Cultural Studies Program and Jim persuaded him to add Salt Lake City to his list of stops. Prior to the workshop, Jim mailed out a flyer that included a sign-up form for the workshop. It was filled immediately, with a waiting list. Most importantly, this event established Cosmic as the center of alternative spiritual, philosophical and religious expression in a time where there was little tolerance for it in Salt Lake City.

When “Patriarchs and Politics” by Marilyn Warenski, a local feminist author, came out in 1978, it was clear to us that we needed to sponsor an event for her inaugural book. We held a talk and book signing by Ms. Warenski that filled the Blue Mouse Theater. The book discussion opened up a dialogue about religion and feminism that continues in this community today.

The Year of the Child

Our next event helped established Cosmic as a haven where parents and children could be introduced to beautiful and inspiring illustrated children’s books. Ken’s passion for these types of books was already core to our rare book department, but we had very little presence in high-quality illustrated children’s books from contemporary authors. The University of Utah was holding the “International Year of the Child” event, which included wonderful illustrators and authors such as Caldecott Medal winners Leon & Diane Dillion and David Macaulay.

(L) A copy of Verna Aardema’s 1975 book “Why Mosquitoes Buzz in People’s Ears,” which won the Caldecott Medal for children’s illustration in 1976; (R) Printed announcement about artistic team Leo and Diane Dillon’s appearance on June 11, 1979. The couple also won the Caldecott Medal in 1977 for “Ashanti to Zulu: African Traditions.”

We ordered as many titles from these authors we could find, including some that were out-of-print, and held an autograph party for the Dillions, authors of “Why Mosquitoes Buzz in People’s Ears: An African Tale.” Just from that one event, parents began bringing their children into the Cosmic Aeroplane to pick out wonderful children’s literature that they could not find anywhere else in Salt Lake. 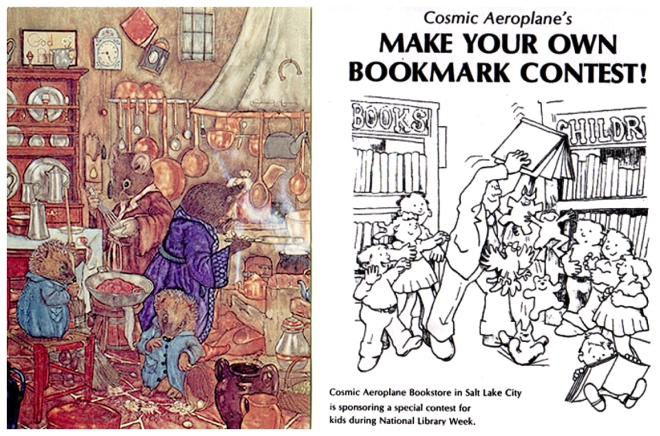 (Left) “The Wind in the Willows,” art by Michael Hague, used on the Cosmic Aeroplane’s invitation for his reception in the Cork Room at the University of Utah’s Union Building on June 15, 1981; (Right) The children’s bookmark contest in 1980 — Art by Neil Passey.

We even held a children’s bookmark design contest, where the winners’ bookmarks were printed and given out at the store. Future events included a book signing from the talented fairytale illustrator, Michael Hague.

Portion of a printed announcement from 1979.

The authors attended these events, spoke and autographed their books, and were welcomed by hundreds of grateful photography and art appreciators.

These events also enabled the sale of some of the signed works of art and photography from the exhibits. Our collaboration with the Art Center gave Salt Lake exposure to photography and art that otherwise may not have made it to the city.

From an announcement printed in 1979 — partial digital restoration by M.E.

Our growing art, architecture and photography book section even attracted librarians from the LDS Church Library, who were some of our most frequent customers.

Blogmeister’s Note: A tall black and white photo by Philip Hyde graced the 1980 Cosmic Aeroplane calendar, which was most of a foot wide and a yard high (30cm x 100cm.)
These popular items were given every year to the public, free of charge, and were hung on walls throughout the region — bringing in new customers and reminding previous patrons about the store. Visit the Cosmic Calendars Project.

When Edward Muench and Ed Abbey’s gorgeous visual and lyrical “Desert Images” was published, Jose´called upon his friend Ed Abbey to autograph the limited first edition and it became one of the most sought-after books in our collection.

Photo of the book, featuring words by Ed Abbey and pictures by David Muench — Published by Harcourt Brace & Jovanovich in 1979.

Muench’s amazing images of America’s deserts and Abbey’s beautiful prose capture the timelessness and diversity of the desert in all its glory and continues to be one of the favorite pieces of art and literature in my library.

Our most notable photography/prose book event was the signing of Robert Redford’s “Outlaw Trail: A Journey Through Time.”

At one of the American Booksellers Association’s annual conferences, I learned that the local movie star’s book “The Outlaw Trail,” was going to be put on the “remainder” pile.
In the book, Redford and friends retraced the trail from Montana, through Wyoming, Utah, Colorado, and Arizona — where from 1870 to 1910, Butch Cassidy and the Sundance Kid, the Wild Bunch, and others rode to escape the law.

Remainders are books that publishers heavily discount prior to placing them out of print. Without thinking twice, I offered to purchase 250 copies of the book to sell at Cosmic.
It was a huge risk, but I thought that if we could get Redford to sign 100 of the books and sell them as limited editions, it would pay for the rest of the books I had purchased.
With Ken’s unique style of persuasion, and Bruce promising to share some of the proceeds from the sale of the book with the Sierra Club, Redford agreed to sign the books — but would not appear in the store.

Photo of a well-read library copy of “The Outlaw Trail.”

Redford’s personal assistant, “Bobbie,” scattered the books in practically every room of his Sundance home, including the bathrooms. After many months of waiting, we had the signed books in hand — literally on the day of our event, after Ken drove up to Redford’s home in his vintage red pickup truck to collect the signed books. Ken arrived minutes before the store opened.

With scores of people lining up in front of the store hours before we open the doors, it was the most successful book event we ever held (without the author present)!
Today, I can still find some of those signed editions of “The Outlaw Trail” on rare book sites going for hundreds of dollars.

Cosmic and the Blue Mouse Theater sponsored other events

… including a Halloween film festival of vintage horror films ( Who could forget the classic, “Invasion of the Body Snatchers?” ) and an exhibit of inventive artwork and photography by the extremely talented Cosmic Aeroplane staff.

Art by Neil Passey — See the page “Cosmic Bookmarks and Cosmic Paper Project” for a link to this large poster the way it was printed.

Being a part of the Cosmic Aeorplane’s amazing adventures with these creative events was so formative to my life that I decided to dedicate myself to a career of marketing, advertising and public relations. I’ve moved on from the world of promoting literature to technology, but the love of sharing new ideas, innovation and creativity with the rest of the world still remains…long after Cosmic

Acknowledgements and credits for these images go out to: Jane Shurtleff, Becky Roberts, Steve Jones, Charley Hafen, and the Rare Books Division of the Marriott Library at the University of Utah. Other illustrations, particularly portions of objects like books, are used for historical purposes under International Fair Use Laws. Digital filtering by M.E.

We actively request your contributions of pictures, memorabilia, and oral histories concerning the Cosmic Aeroplane — please contact our blogmeister: